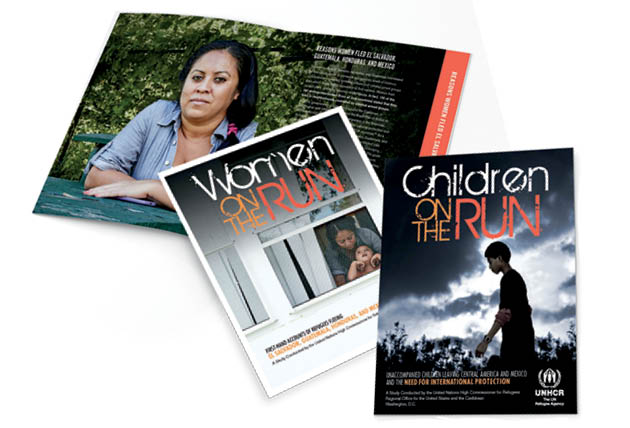 Today, the plight of men, women and children from Central American countries making their way to the southern U.S. border in hopes of seeking asylum is often reduced to quick sound bites and social media posts. However, the complexity of this humanitarian situation – and the reasons that drive refugees to flee – has long been documented by the United Nations High Commissioner for Refugees (UNHCR).

After reviewing the UNHCR’s study, Herrmann developed a gripping title for the publication, “Children on the Run,” and its distinctive design treatment. Compelling photography was used to bring the stories of unaccompanied children to life, and the report’s key statistics and findings were emphasized through the use of colorful charts and easy-to-read graphs. The resulting 114-page publication was presented to those attending a UN meeting on the refugee crisis. The media also received copies of the report and used its data and content in news coverage that appeared around the world. In addition to the printed version, Herrmann created a special webpage that featured executive summaries of the report in both English and Spanish.

Following the success of its first report, the UNHCR again engaged Herrmann to work on a similar publication – one that told the story of tens of thousands of women desperate to flee the surging tide of violence in El Salvador, Honduras, Guatemala and parts of Mexico.

Recognizing the power of the “On the Run” graphic treatment used for the original report, the UNHCR determined that “Women On the Run” was both fitting and a natural extension of the brand. The follow-up report captures the stories of 160 women and, like the previous publication, brings their plight to life with bold photography, heart-wrenching details of the reasons they flee their homelands, and statistics presented in the form of straightforward charts and graphs.